Denis Villeneuve proves he’s the one to take on the impossible task of successfully adapting Dune for the big screen. After a successful theatrical/streaming debut, Warner Bros. is giving fans a few different ways to pick up this new sci-fi classic. For those still rocking a 3-D television or have a compatible projector - this trip to Arrakis makes a fitting 3-D Blu-ray debut. Depth may not always be impressive, but it delivers when it counts, and while not an Atmos mix, the DTS-HD MA 5.1 track is still a beast to be reckoned with. The 4K is still the best overall A/V experience, but this disc stands tall. Highly Recommended

Frank Herbert’s seminal science fiction novel Dune is the great white whale for many a filmmaker. After Lynch’s beautiful but extremely flawed 1984 version, the only other successful adaptation has been the 2000 miniseries which itself had its own problems (bizarre triangle costumes notwithstanding). For decades Hollywood has been trying to get a new big-budget adaption on theater screens courting a number of big-name and rising-star filmmakers in the process. Now Denis Villeneuve has become the latest director to tackle the project and actually succeed.

The problem with adapting Dune has always been the unwieldy source material. Biblical in scale with intricate political and economic machinations that would make Churchill look like a simpleton, the story is nearly impossible to cut to the meat. For David Lynch’s version (any of the cuts) the difficulty has been capturing the character's internal monologues and plot details in a way that distills that massive book down to a two-hour- and change film. The Frank Herbert’s Dune miniseries managed to grab everything of the book and bring a relatively faithful presentation, but the extraordinarily slim production budget with intensely silly costume design and mid-90s era video game special effects makes it almost too ambitious for its own good. Especially when compared to the better funded and even more successful follow-up miniseries Children of Dune. 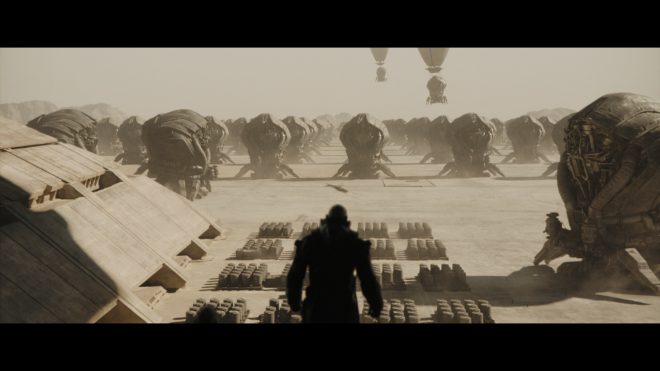 And now we have the first half (or even third depending on recent interviews) of Villeneuve’s take. Together with co-writers Eric Roth and John Spaihts, Villeneuve managed to stay true to the source while also adapting and distilling the material so that the uninitiated viewer could understand everything without betraying longtime fans of the novel. By focusing strictly on just the first half of the book for this 155-minute film, Villeneuve had the room to move around the vast universe, introduce the key players, showcase the important events, but also bring his own flourishes to the story and make it uniquely his.

One of the things I really liked about this version is how focused it is on the central characters of this particular half of the story. Past adaptations felt the understandable need to introduce everyone all at once without regard for their place in the story. That is a lot of material all at once the audience has to keep track of for a long time before it’s even relevant. This one doesn’t do that. For example, the Padishah Emperor Shaddom IV who is an architect of the plot against the Atreides isn’t introduced. He’s alluded to in passing but since the character doesn’t become central to the story until the last third of the book it makes sense not to burn time introducing him or his daughter the Princess Irulan until necessary. Similarly, Baron Harkonnen’s sadistic nephew Feyd-Rautha so famously played in 1984 by a high-out-of-his-gourd Sting isn’t a necessary character until the very end of the book so he doesn’t appear here. The next film is the best time to introduce these different characters since that’s when they actually become important.

And thankfully we are getting a next film. This adaptation of Dune was famously mounted with the understanding that this was only going to be the first part of a bigger franchise - but without the guarantee, there wouldn’t be more. The film had to perform at the box office and on streaming before Warner Bros. would commit fully. Personally, I think that was just a bunch of marketing hogwash. You don’t hire a massive cast of in-demand actors for one film and leave it to hope they’re going to be available in a year or two to film the next installment without some kind of guarantees attached. Regardless - I’m glad this film worked and we’re getting more of it. This Dune works for folks who don’t know the books intimately and for those already familiar it doesn’t alienate them either. For such dense material, Villeneuve and his team genuinely accomplished the impossible. Hopefully, they can do it again for a rousing concluding chapter. 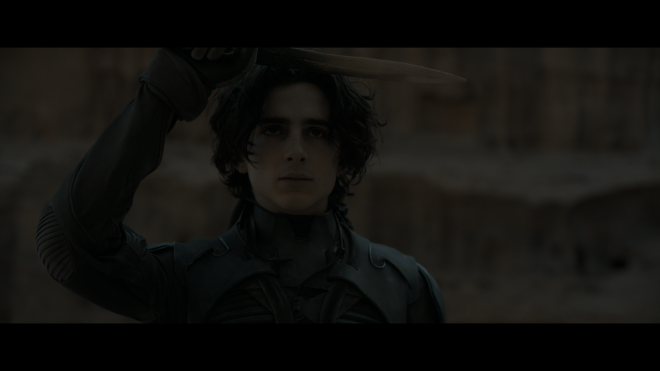 Vital Disc Stats: The 3D Blu-ray
In addition to a 4K Ultra HD Blu-ray and standard Blu-ray release, Warner Bros. continues their multi-format support with a two-disc 3-D Blu-ray + Blu-ray + Digital release of Dune. Pressed on two region-free BD-50 discs, the discs sit in a sturdy standard two-disc case. The set I received did not come with a slipcover. Depending on your setup, the 3-D disc loads to a static image automatically triggering your television’s 3-D presentation. 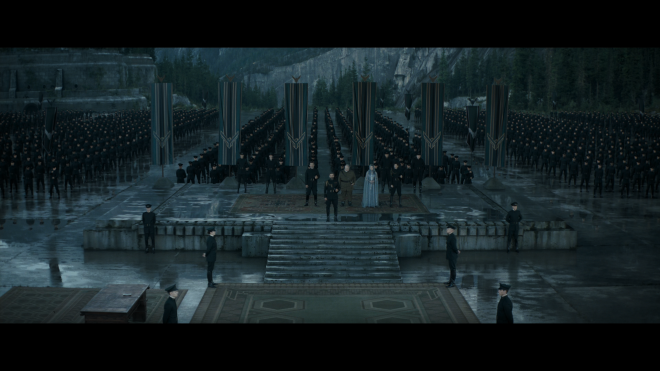 Much like Villeneuve’s Blade Runner 2049, the 3-D presentation offers up a dynamic way to watch but strictly speaking not the best way to experience Dune. Presented with a static 2.39:1 aspect ratio - there are some gorgeous moments with impressive three-dimensional z-axis depth. Even with the numerous close/middle shots, you can see a lot of effort was taken to give every texture in a character’s face and clothing some sense of dimension and depth. Charlotte Rampling’s veil during the Gom Jabbar test is a perfect example of this attention to detail. Another is any of the close tight battles where shields “blip” and “flicker” around the person is another great use of 3-D. Wide establishing shots such as when the voice of the Emperor's emissary arrives for the signing ceremony, Raban looking over the spice harvesters, the assembled Harkonnen army, the blood ceremony of the Sardaukar warriors - all are terrific examples of what this post-conversion has to offer. Details are obviously a tad softer than the 4K, but otherwise, they’re on par with the standard 2-D Blu-ray. Black levels are strong with brilliant luminous whites, with the subdued sandy/brown color scheme on Arrakis with the cold cool blue shades for the other worlds. 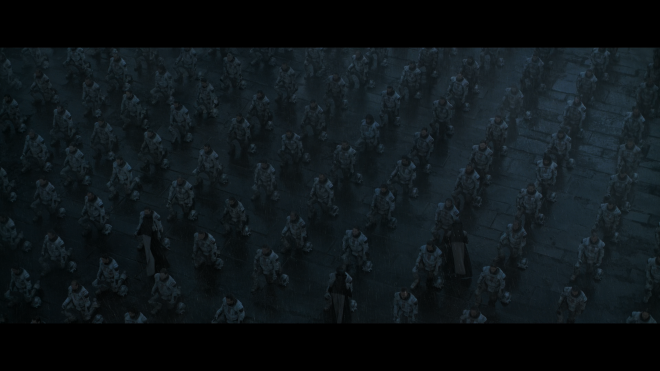 Where this 3-D transfer doesn’t quite do it for me is in the darker or shadowy locations where only one or two actors are in the same room. There’s just not a lot of depth. Aside from costuming and facial features, there are few foreground, middle ground, or deep background objects to give a sense of scale along the z-axis. So these sequences tend to look more like well-defined pop-up book images. The conversion also doesn't make any protrusion effect, so nothing actually "pops" out of the screen. I've read that some folks with 3-D projectors were having issues with some slight banding and a little crosstalk, but I didn't experience that on my OLED screen.

Overall this is a pretty solid post-conversion 3-D experience. I didn’t get a chance to see this theatrically in 3-D, showtimes never lined up and I only kept going to see it in IMAX so I'm glad to finally see it in 3-D.  When this conversion is great it’s really impressive. But for an overall visual experience, I still favor the 4K Dolby Vision presentation. This is a fun disc to have and I’ll pull it out again, but it probably won’t be my default. 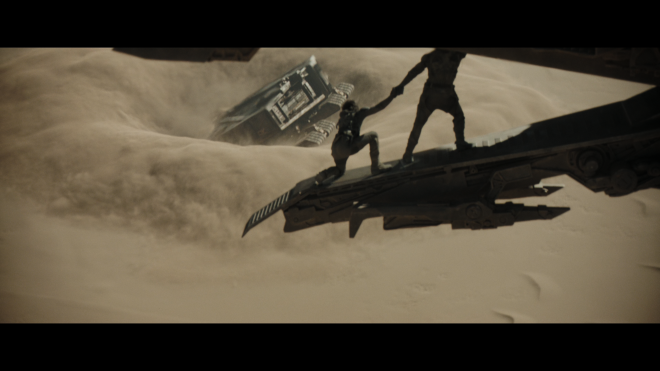 As is the case with WB’s 3-D releases, they can take an impressive post-conversion 3-D transfer but then diminish the experience by not including the Dolby Atmos track that is included with the standard Blu-ray and 4K discs. Instead what we’re getting is a damned impressive DTS-HD MA 5.1 mix. It may not quite be fair to compare the two since the Atmos is by far the more active and engaging and impactful experience - but it’s important to state emphatically that this 5.1 track is still excellent. Compared to other DTS-HD MA 5.1 tracks, it’s damned impressive. Now those tech-savy individuals out there can rip the Atmos track from the included 2-D Blu-ray and remux it with the 3-D for their home theater rig, but that’s a hell of a lot of work to get the best of both worlds.

Flipping on my rig's DTS Neural:X function, this track picked up a lot more impact and space. Given Hans Zimmer’s excellent score, there’s plenty of LFE and the Harkonnen/Sardaukar invasion is an excellent action-packed sequence. While an improved experience, that Atmos mix is such a beast you just can’t compare the experiences. I wish WB found the room to include the Atmos because then you really would have the best possible 1080p viewing experience on disc. 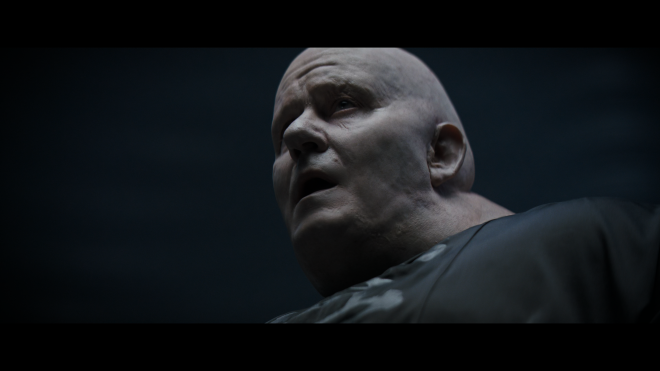 There aren't any new bonus features with this set - everything is on the included 2-D disc. To read the full list of bonus features, CLICK HERE. 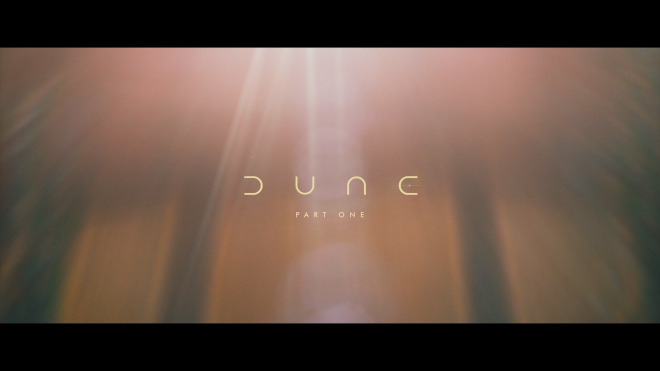 Denis Villeneuve’s Dune is the beginning of a sci-fi cinematic masterpiece. With a 2023 release date set for Part 2, we have a bit of a wait ahead of us to experience the conclusion of this story. For now, this first half of the story is quite possibly the best overall cinematic adaptation of Frank Herbert’s seminal novel. It stays true to the book while also making necessary changes to craft an accessible film adaptation. People who know the book intimately will be right at home while newcomers won’t have to do hours of research to understand what is happening.

Warner Brothers completes the Dune home video experience with an impressive 3-D Blu-ray release. A suitable post-conversion, there are several impressive sequences that add real depth and dimension to the image but many scenes don’t quite gain anything. Coupled with a downgraded but still strong DTS-HD MA 5.1 track, you have an overall pleasing A/V experience. Not the best overall - that’s still the 4K Ultra HD Blu-ray, but if you’re a 3-D enthusiast this disc is not a disappointment. Highly Recommended