This dramatic portrayal of the intense 1970s rivalry between race drivers Niki Lauda and James Hunt captures the contrasts between the two champions. While Hunt was a charming and handsome ladies' man, Lauda was a loner with a single goal: victory. 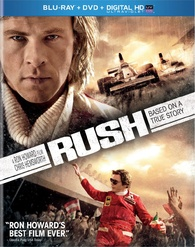 The greatest rivalries are often born in the unlikeliest of moments, and with equally improbable participants. At their heart, true rivalries serve as an inspiration, however contentious they may be, stimulating those embroiled in competition, as well as spectators marveling at the ability of the challengers. But the 1976 Formula 1 rivalry between Austrian racing legend Niki Lauda (Daniel Brühl) and bravado-spewing Englishman James Hunt (Chris Hemsworth), as depicted in Ron Howard's 'Rush,' was so intense and both men's personas so grand, it's a wonder it hasn't been told countless times over.

What made the Lauda/Hunt rivalry so great wasn't just the unbelievable confluence of events that would determine the World Championship of that year; it was also the distinct personalities of the men who had emerged as the best in the world, and would feverishly compete to claim that title. The dichotomy between Niki Lauda's staunch determinism and highly structured precision, and James Hunt's devil-may-care attitude and innate, reflexive talent behind the wheel is the sort of thing that can seemingly only be a writer's conceit. In the hands of screenwriter Peter Morgan who, in the last decade, has delivered no less than five historical screenplays, all with a varying focus on intense relationships between larger-than-life characters, it may be something like old hat at this point. Films like 'The Queen,' 'Frost Nixon' and 'The Damned United,' all have that basic quality of conflicting personalities in pursuit of universal greatness and personal glory.

Morgan takes the elements of opposition and rivalry and sets them against the backdrop of the imminent danger that awaited drivers in what was, at the time, a far more dangerous sport than it is today, as each race carried with it a high probability of a devastating or even fatal car crash before a victor could be decided. In Morgan's script, the danger inherent in the sport was as much a draw for men like James Hunt, as the relentless pursuit of perfection and the fusion man and machine was for Niki Lauda. The possibility of death or a catastrophic car crash is also a macabre appeal for audiences apparently, as 'Rush' comes back time and again to the aspect of danger and the death defying nature of men whose skill affords them the ability to harness the tremendous power of their cars and bend it to their will.

Instead of taking a hubristic approach to the idea of Formula 1 drivers ostensibly forfeiting their safety for a chance at glory, Howard and Morgan choose to play up the human element, making the desires of each man the fulcrum that turns the film's plot. Early on, Howard puts the focus on Lauda and Hunt, giving them each a significant amount of screen time to develop their characters and demonstrate where it is they're coming from. There's even time for a perfunctory romantic excursion featuring Olivia Wilde as Suzy Miller/Hunt and Alexandra Maria Lara as Marlene Lauda. While the moments strive to flesh the characters out, Hunt and Lauda are largely revealed to the audience by way of Morgan's unwise decision to get into the men's heads via an accompanying voice-over. The tedious handholding of the narration takes the place of actual character development as Morgan (and, by extension Lauda and Hunt) simply proclaim who the characters are, what they're thinking, and what they want. There's too much telling and not enough showing going on, an aspect that becomes all too resonant as the film progresses.

As a result, the rivalry between the two becomes a constant talking point, something the characters mention with such frequency it begins to have the same kind of diminishing returns as the script's fixation on the possibility of death waiting for one or both of these men at every turn. Had it merely been used to introduce the audience to Brühl and Hemsworth's characters, the voice-over might have been an attribute – like pushing a car along until the engine turns over – instead it become a crutch that robs the film of the opportunity to develop a deeper kind of drama, boiling much of the narrative down to a dramatic reading or overview of a year in the life of Niki Lauda and James Hunt. What's more, the narration is so determined to remind viewers that this is fact; it winds up stifling the incredible nature of the story, denying 'Rush' any chance to truly breathe and get to the heart of who these men were and, more importantly, why they were so driven to be and to stay competitive.

One of the more curious elements of 'Rush' is how the film's attempts to compartmentalize the narrative into a tale about two conflicting personalities extends to the race sequences as well. For a movie built around the sport of Formula 1 racing, there are surprisingly few races to behold. Those that actually do make it to the screen are little more than a frenetic montage of images and sounds that offer the tremendous sensory experience of the cars' immense power and screaming engines, but their uniformity, brought on by a short textual recap of who won the race, leaves most of them as underwhelming snippets intended to show the characters' professional progression. By the time the film gets to the climactic race, Howard has already presented the audience with enough shots of gear shifters, pedals, and rearview mirrors that even the high stakes of the moment begin to feel mechanical, unimaginative, and, like too much of the film, downright conventional.

The movie's saving grace, then, would have to be the conviction with which Brühl and Hemsworth play these real-life, sometimes obnoxious characters, and how Morgan's script not only allows for a vacillation of who is occupying the protagonist role, but also a shift in where the audiences' sympathies lie. 'Rush' begins with Hemsworth's laid-back, party guy attempting to unseat the robotic determination of Brühl's Lauda, but by the time the film reaches the third act, circumstances have changed so dramatically the conflict for the audience will be (for those who don't already know) to determine which man they want to emerge victorious.

For all it's handholding, frustrating literal mindedness, and borderline redundant racing sequences, 'Rush' still manages to achieve an emotional timbre that will be far too simple for some, but just right for others. Like the racers it is portraying, the film is itself in pursuit of a bona fide experience, but the question stemming from this depiction is: When does the pursuit of an authentic experience give way to doing a simple impression of something truly authentic? In the end, 'Rush' winds up being a dramatic recreation of real moment in time that is competently, but not compellingly told.

'Rush' comes from Universal as a 50GB Blu-ray + DVD + Digital HD combo pack in the standard two-disc keepcase. The disc will upload and play a few previews prior to the top menu, but they can be skipped, if you so wish.

The 1080p AVC/MPEG-4 encoded transfer provides a nice, detailed image most of the time, but it will also test some viewers' limits in terms of manipulation to convey a specific period in history. Here, colors are desaturated to a give everything a sun-soaked, slightly bleached look that actually seems to work with the tone of the film, and helps make some of the '70s fashion look less garish and intentionally show-stopping than other productions set in a similar era. The overall look of the film doesn't mar the quality of the image, however, as it generally delivers a strikingly detailed picture that renders facial features and textures with great assurance, and clean, well-defined edges. Additionally, contrast levels are generally good, producing full-bodied blacks with terrific shadow delineation, while no banding is seen anywhere.

While the image is free of noise or artifacts, there are times when portions of the image near the edge of the screen lose a small amount of detail and can stand out in stand out against the clarity of the rest of the film. This only happens on a few occasions, but it is noticeable and does take what could have been a superb image down a notch.

Still, even with that issue, 'Rush' comes with a stylized image that manages to produce some great detail and fine textures throughout.

The DTS-HD Master Audio 5.1 mix is an absolute feast for audiophiles, as it generates a great listening experience that takes a heightened approach to the world of Formula 1 racing, and gives it a bombastic Hollywood makeover that sounds tremendous. As one would expect, the revving of the engines, and the sounds of tires shrieking on asphalt are some of the most predominant effects you will here. But where the mix achieves its greatness is not in the clarity of the sound effects, or the effective use of LFE throughout, but rather in the way the imaging of the sound actually heightens the visual experience of the film.

Dialogue is crisp and sharp, and delivered primarily through the center channel speaker – although some of the announcing of the races will come through various other channels – while the sound effects and score are delivered mostly through front channels with the rear speakers being used to enhance the listening experience, or to provide depth in the more action-packed sequences.

The sound of 'Rush' is arguably as important an aspect of the film as the image, and while the picture comes with a few faults, there are really none to be found in the audio.

Even though it sticks to convention when a different approach might have made for a far more interesting film, 'Rush' manages to be entertaining largely due to the performances by Brühl and Hemsworth, who keep the characters of Lauda and Hunt interesting, even when they're not exactly likable. What keeps this from being a great film is Howard's reliance on unadventurous but steadfast filmmaking methods that result in broad characterizations and facile illustrations like men and their toys, or the use of songs that literally depict what's transpiring on-screen. These elements are just derivative, and often make a compelling story feel lackluster with a relentless need to ensure the audience understands exactly what's going on. While the film looks nice, it mostly gets by on series of fast-cuts and jerking transitions intended to depict the frenzied nature of the sport. Still, with a good image, terrific sound, and some interesting extras, 'Rush' comes recommended.

Sale Price 9.5
Buy Now
3rd Party 3.99
In Stock.
See what people are saying about this story or others
See Comments in Forum
Previous Next
Pre-Orders
Tomorrow's latest releases