Feel the love this holiday season with the Love Actually 10th Anniversary Edition! Funny, charming and heartwarming, this delightful romantic comedy follows eight couples whose lives intersect shortly before Christmas. Headlined by an incredible roster of stars, this beloved film also features early movie appearances by Martin Freeman (The Hobbit), Andrew Lincoln (The Walking Dead), January Jones (Mad Men) and Thomas Sangster (Game of Thrones). From the makers of Bridget Jones's Diary and Notting Hill, it's the perfect companion for every Christmas. 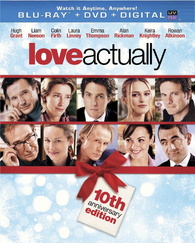 After the enormous success of his scripts for 'Four Weddings and a Funeral', 'Notting Hill' and 'Bridget Jones's Diary', British screenwriter Richard Curtis decided to try his hand at directing as well. Naturally, another romantic comedy seemed in order. Not just any rom-com would do, however. With a host of unused story ideas at his disposal, Curtis decided, rather than to choose any one of them, to throw them all into a pot and mix them up to create the romantic comedy to end all romantic comedies. Thus we have 'Love Actually', a film jam-packed with A-list stars and bursting at the seams with intertwining narratives all on the subject of love in the modern age. Somehow, amazingly, it works.

There are at least nine main storylines in 'Love Actually', plus a series of subplots and side-stories. In no particular order, Colin Firth is a recently-divorced author who tries to hide from society in a French villa, only to find himself falling for a Portuguese housekeeper (Lúcia Moniz) that doesn't speak a word of English. Martin Freeman and Joanna Page meet-cute as the body double stand-ins during the filming of the nudie scenes for an erotic thriller. The domestic bliss of newly-married Chewitel Ejiofor and Keira Knightley faces a potential disruption when the bride learns that the groom's best friend has been harboring a secret crush on her. A brash young caterer (Kris Marshall) decides that he's struck out with too many British women, and formulates a plan to try his luck in America.

Hugh Grant plays the new British Prime Minister, who has trouble tending to matters of state due to the distraction of his lovely assistant (Martine McCutcheon). Meanwhile, the PM's sister (Emma Thompson) discovers that her husband of many years (Alan Rickman) has been tempted by the wiles of a younger woman at his office. Another of Rickman's employees (Laura Linney) can't start a relationship with the hunk she's lusted after for years (Rodrigo Santoro) because of complications with her mentally-unstable brother.

In perhaps the funniest story, Bill Nighy plays a washed-up rocker who decides to implement a policy of total, unflinching honesty in all of the promotional interviews for his latest comeback attempt, an admittedly crappy holiday ballad. Much to the chagrin of his best friend and manager, the only stable relationship he's ever maintained in life, the ploy gives his career a sudden, much-needed boost.

The most emotionally-raw storyline concerns Liam Neeson as a widower attempting to re-establish a relationship with his young stepson (Thomas Sangster). Parallels to the later tragedy in the actor's real life can't help but make this particular segment of the film very uncomfortable to watch.

Any one of these plot threads might have been enough to form the basis of an entire movie. Instead, Curtis allows snippets of each to swirl around the others, sometimes forming unexpected linkages between them. The downside to this is that not all of the storylines are given enough screen time to fully develop. Colin Firth's segment in particular could use more fleshing out. The caterer and the naked stand-ins are both amusing, but could easily be excised from the film entirely without any negative consequences. In fact, some foreign versions of the movie released in censorious countries did just that to the Freeman/Page section.

Nevertheless, the fragmented structure works despite these issues, primarily due the strength of the cast and the writing. All of the characters are endearing, and the dialogue is uniformly smart and witty. Not every storyline will end with love conquering all. Some are truly heartbreaking.

Even at 2 1/4 hours, the movie glides by in a breeze. It could easily stretch another 15 minutes or so without feeling long. Many romantic comedies make some token attempt to appeal to men as well as women. Most fail. 'Love Actually' is the rare exception that both genders will warm to. 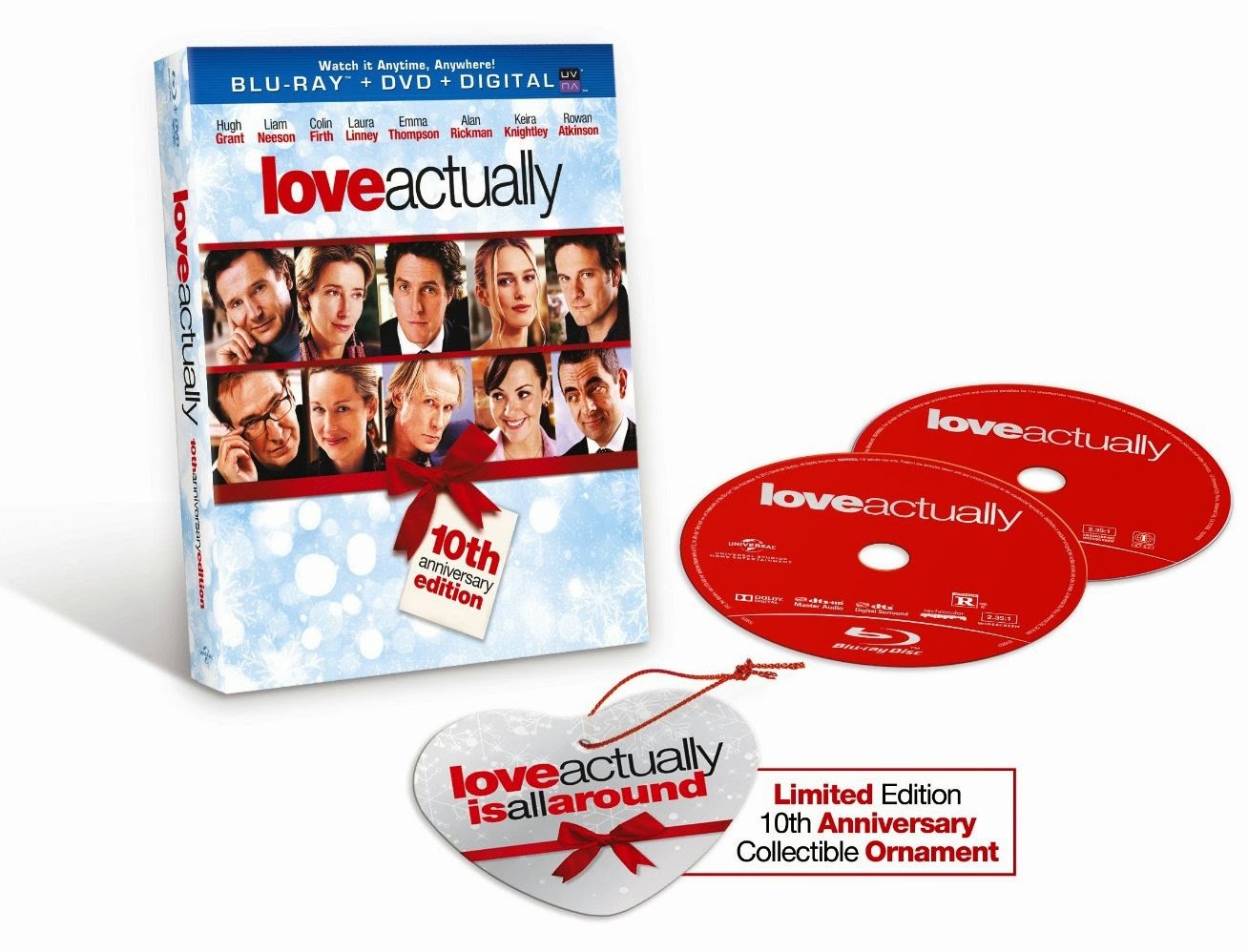 'Love Actually' was previously released on Blu-ray back in 2009 with a decent enough high-def edition that included a handful of bonus features. For some reason beyond my personal comprehension, Universal Studios Home Entertainment has chosen to re-release this Christmas-themed film four years later – in the month of October – with a new 10th Anniversary Edition that comes packaged in a cardboard box with a heart-shaped Christmas ornament. Again, this Christmas movie, which comes with a Christmas ornament, is being released in the middle of October. I just don't understand marketing people at all.

Unlike the earlier Blu-ray, the anniversary edition also includes a DVD copy and a redemption code for an UltraViolet Digital Copy. The discs are stored in a standard Blu-ray keepcase inside the very flimsy box. Given the general crappiness of the box and the Christmas ornament, I imagine that most buyers will probably just throw those out and stick with the keepcase.

The Blu-ray disc has been re-authored with new menus. All BD-Live connectivity from the previous release has been stripped out, which helps the disc to load faster. Thankfully, no trailers or ads are forced before the main menu. A helpful "Resume Play" option has also been newly added. 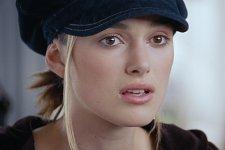 Back when I reviewed the 2009 Blu-ray release, I gave the disc a satisfactory score and remarked that it looked pretty good overall, but noted a general softness that I attributed to the possible application of some Digital Noise Reduction filtering. The new Blu-ray promises an "All-New 10th Anniversary Digital Restoration" on the packaging, which led me to assume that the film had been given a new video transfer. (Is that not a reasonable conclusion to reach from that text?) As far as I can tell, this is a blatant falsehood. I've compared the two discs extensively, and to my eye they look identical, or at least virtually indistinguishable for all practical purposes. In fact, given that the new disc is once again encoded with VC-1 compression (which has fallen out of favor with all the major studios and is very rarely used anymore), it wouldn't surprise me at all if this turned out to be the exact same video encode from the 2009 disc.

[Note: As I was in the process of writing this article, another review site posted some screenshots which suggest that the new disc is slightly brighter and sharper than the old one. I don't have the space here to rant against my inherent distrust of misleading screenshots, but I will point out that I cued up the scenes in question and did not see those differences on my calibrated projection screen. Brightness and detail levels look the same to me, and some minor speckling found on the prior Blu-ray is present in exactly the same frames on the new one.]

The good news here is that, as I said above, the previous Blu-ray looked pretty good, and so does this one. The 1080p/2.35:1 image is very slick and glossy. It's also quite bright, possibly the result of a little contrast boosting. On the one hand, this helps the vibrant colors to really pop off the screen. On the other hand, it means that the picture doesn't have much of anything going on in the darker part of the scale.

I once again noticed a general softness. However, since last watching the earlier Blu-ray, I've upgraded my projector and now have a larger screen. Studying both discs carefully, I'm no longer convinced that Digital Noise Reduction was employed (at least, not to any distracting extent). The picture (on both copies) has a visibly intact grain structure, and fine object detail (especially in facial features) is reasonably well resolved. I think the movie may have just been photographed with a softer focus than I perhaps expected.

If anything, I may be a little more impressed with the high-def transfer (even the old copy) now than I was in 2009. Even so, I've decided to leave my score where it was before. While this is a good-looking disc, it's still a little soft and lacks real contrast between bright parts of the image (which is basically everything here) and dark. 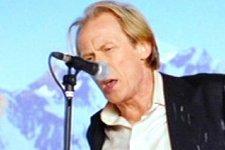 Here's where things get really weird. As before, the new Blu-ray features a lossless DTS-HD Master Audio 5.1 audio track. However, two songs in the movie's soundtrack differ from the earlier disc. It turns out that the 2009 Blu-ray represented the film's UK theatrical cut, while the 2013 Blu-ray represents its North American theatrical cut. These alternate songs on the soundtrack are the only differences between the two versions of the movie. At time code 1:04:04, the American version (2013 Blu-ray) plays Kelly Clarkson's "The Trouble with Love Is," but the UK version (2009 Blu-ray) plays the Sugababes' "Too Lost in You."

That Sugababes song appears in the American version later (again, new Blu-ray), halfway through the end credits at time code 2:13:30. Meanwhile, the UK cut on the older disc has a cover of "Jump (For My Love)" there performed by British pop band Girls Aloud.

I doubt many viewers will sit through all of the end credits on a regular basis, so the choice between these two versions of the movie really comes down to a preference for Kelly Clarkson or the Sugababes during the office Christmas party scene. Personally, I think the Clarkson song works better there, and I would probably default to watching the new Blu-ray if given the choice, but I'll be honest that I never even noticed this switch until it was pointed out to me.

In other respects, the movie has a standard rom-com sound design. The mix is balanced almost entirely toward the front soundstage, with just the faintest bit of envelopment hitting the surround channels. Dialogue is perfectly intelligible. The music swells up loudly, and has some nice directionality during the early wedding scene, but the track is shy on low-end activity or dynamic range.

There's nothing particularly wrong with the soundtrack. This just isn't the type of movie one singles out for an audio demo.

The movie is almost entirely in English, but has a few scenes with Portuguese dialogue. English subtitles are contained within the movie image, and are safe for viewing on Constant Image Height projection screens. 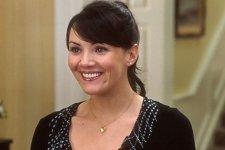 Aside from the DVD, the UltraViolet Digital Copy and the Christmas ornament, the 10th Anniversary Edition of 'Love Actually' contains the same bonus features found on the earlier Blu-ray.

'Love Actually' is a chick-flick that even men can enjoy without guilt. If you already own the previous Blu-ray release of the film, there's little reason to "upgrade" to the 10th Anniversary Edition unless you were really bothered by the absence of that Kelly Clarkson song on the soundtrack to the old disc and have waited desperately for it to be restored on this copy. Otherwise, the audio/video quality of the disc and the bonus features are all essentially unchanged, despite false promises of a "Digital Restoration."

On the other hand, if you didn't already own the earlier Blu-ray, this copy is just as good and comes just as recommended… unless you can find the old one in a discount bin somewhere.

Sale Price 9.85
Buy Now
3rd Party 14.99
In Stock.
See what people are saying about this story or others
See Comments in Forum
Previous Next
Pre-Orders
Tomorrow's latest releases