Hell of the Living Dead / Rats: Night of Terror

HELL OF THE LIVING DEAD: An accident at a chemical plant unleashes a horrific virus, and an elite SWAT team is sent to New Guinea to investigate. But when they arrive on the hellish island, they discover a plague of flesh-eating zombies. RATS: NIGHT OF TERROR: In the year 225 A.B. (After the Bomb), a group of post-apocalyptic bikers discover an abandoned research laboratory filled with food, water... and thousands of rats. But these are no ordinary vermin; these are super-intelligent mutant rodents with a ravenous appetite for human flesh.

You gotta love a low-budget zombie flick like 'Hell of the Living Dead' for the nonsensicalness of the production and the laughably bad pretexts for the actions of several characters. At the start, it takes an odd moment to show the lead supervisor of a top-secret research plant reading the instruction manual in case of a disaster while his facility is overrun by flesh-eating hordes thanks to a greenish, mysterious biochemical leak. The filmmakers edit stock footage of indigenous people in ceremony better suited for 'The Faces of Death' series into the storyline purely for shock value because the scenes insinuate cannibalism. Funnier still is the sound effects of crackling turkeys standing in for flamingos and cranes, testing an audiences' suspension of disbelief to the point of farce.

Luckily, the unintentional hilarity doesn't end there in a Spanish-Italian coproduction from Bruno Mattei, cult filmmaker of several wonderfully bad sexploitation and "women in prison" erotic features. From a script that took four writers to complete, the plot follows a small group of commandos in Papua New Guinea investigating the sudden drop in communication with the chemical facility. Merging aspects of George A. Romero's 'Dawn of the Dead' with Lucio Fulci's 'Zombi,' the gung-ho soldiers come across journalist Lia Rousseau (Margit Evelyn Newton) and her team while traveling through the island besieged by the walking dead. Soon, their so-called covert operation is overshadowed by the inexplicable deaths of the natives, which all relates back to the main plot in a twisted, sinister way.

But ignore the plot and don't sweat the minor details leading to a gorily sensational conclusion. What makes the film, which cult enthusiasts also know as 'Zombie Creeping Flesh,' such an awesomely crap-tastic horror feature are the characters' absurdly asinine behavior and the hysterically lame justifications for them. Most memorable, as well as overtly sexist, is the dumbest excuse for Newton's Lia to expose her breast. And there is absolutely no narrative reason for this other than to simply relieve the actress of her blouse, made all the more absurd when Mattei's camera suddenly pushes in for a close-up, like she were Superman. Topping off the entertainingly oblivious badness is the unauthorized use of Goblin's music, making this a wonderfully memorable "so-bad-it's-good" cult piece. (Movie Rating: 3/5) 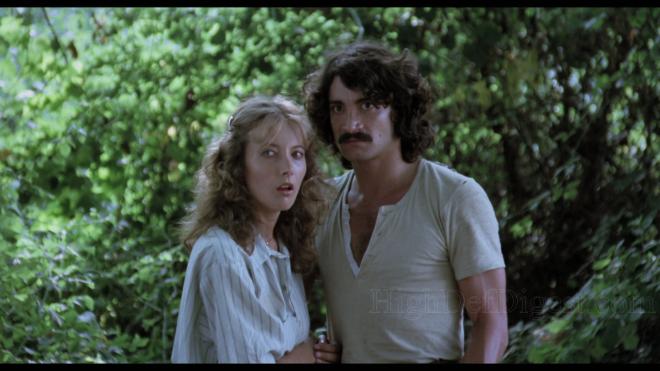 Almost as if the filmmakers worked tirelessly to ensure the audience never doubts what they're watching, 'Rats' is a curiously entertaining horror flick. Set in a post-apocalyptic future where mutated rodents evolved into savage, bloodthirsty killers, those brave enough to sit through its 97-minute runtime are treated to a mischief of rats, sometimes literally showering intended victims. It's a hilarious sight since it's easy to imagine some poor chump hired specifically to stand on a ladder dumping buckets full of the furry critters on the cast. Or, as in a few scenes, hurling them with gloves while an actor squirms and pretends to be swarmed. One cute little rat, half white and half black, is even given lots of screen time as if to suggest it might be the mastermind leading the attacks.

A needlessly complicated plot explains at the opening that after a nuclear holocaust in 2015 — start stocking supplies now! — has transformed Earth into a barren wasteland, survivors divided into two factions. Some have taken refuge underground while others called "New Primitives endure by foraging deserted, ghost-like cities. One such group arrives at what funnily appears like the soundstage remnants of Sergio Leone's 'One Upon a Time in America.' Well-groomed with good hygiene — proof that even during the end of times, there won't be a short supply of toothpaste, mouthwash and Aqua Net hairspray — the faux-punk gang arrives heavily armored with full tanks of gas and ready to party. Come nightfall, however, the nocturnal foragers feast on their power-struggle melodrama.

Co-directed by Bruno Mattei and Claudio Fragasso, architect of the infamously bad 'Troll 2,' the movie is hilariously plagued by various other distractions. Working under the pseudonym Vincent Dawn and co-written by Hervé Piccini, the story supposedly takes place over two centuries after nuclear war but everyone and everything remains trapped in 1984, from the clothing and hair to the technology. A computer the size of a living room with a 12-inch monitor is nothing more than a wall of buttons, and a rotary pay phone still stands intact on a sidewalk. Even funnier is that these relatively young characters actually know what these devices are and how to use them. One Hare Krishna dude spews encyclopedia-like verbiage as if comically adding another futuristic air. Altogether, however, it makes for a fun time with a side-splitting twist at the conclusion. (Movie Rating: 3/5) 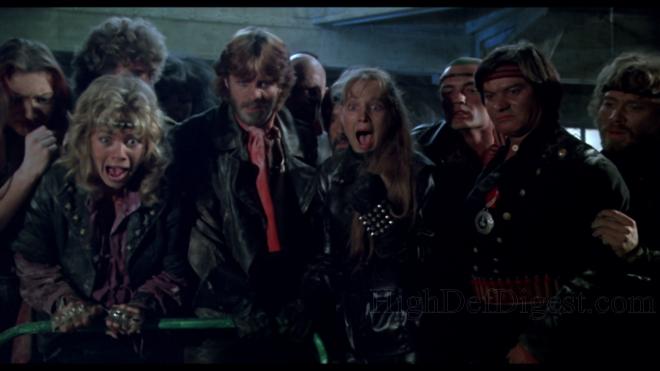 Blue Underground brings 'Hell of the Living Dead' and 'Rats: Night of Terror' to Blu-ray as a single-disc double-feature. The Region Free, BD50 disc sits comfortably inside a regular blue case. After choosing which movie to watch, viewers are taken directly to an animated menu screen for that particular film with full-motion clips and music.

Radioactive zombies make your flesh creep with a shockingly good 1080p/AVC MPEG-4 encode that makes the cannibal gore all the gorier. Aside from the stock footage, the source appears to be in excellent shape, showing lots of sharp details and definition in nearly every scene. Then again, the very mild application of noise reduction is at times apparent. Thankfully, it's nothing too distracting, as facial complexions remain revealing and fine lines in clothing, hair and the surrounding foliage are distinct. Contrast is comfortably bright with clean, crisp whites while black levels are true and deep with plenty of visible details in the shadows. The color palette is well-saturated and accurate, making this a great high-def transfer. (Video Rating: 4/5)

The rats terrorize Blu-ray with a strong 1080p/AVC MPEG-4 encode (1.85:1), showing plenty of good, fairly shape details throughout. The source used appears to be in great shape, though it also looks like the result of some very minor noise reduction. Thankfully, it's not enough to ruin the picture, as a fine layer of grain remains visible and healthy facial complexions are still revealing. The bigger problem is the contrast running too hot, causing some negligible clipping and blooming in several spots, and there are a few moments of very light aliasing around edges. Black levels are not affected by this, looking true and accurate with very good shadow delineation. Colors are most impressive with well-rendered and saturated primaries. (Video Rating: 3/5)

The living dead moan and groan their way to Blu-ray with a DTS-HD Master Audio mono soundtrack that delivers an engaging and satisfying soundstage. Although mostly restrained to the center, imaging is fairly broad and welcoming with lots of background activity that's discrete from beginning to end. Action sequences never falter, as the highs remain distinct and the mids reveal excellent fidelity and warmth. The low-end is nothing special, but it's adequate, giving the design a bit of weight. The eerie, experimental music of Goblin is most impressive, providing a pleasing sense of presence. The dubbing is at times distracting, but dialogue is intelligible and well-prioritized. (Audio Rating: 3.5/5)

Hordes of rodents squeak their way with an equally good DTS-HD MA mono soundtrack. Though for the most part, the lossless mix feels restricted and confined to the center with the music doing much of the leg work creating a decently broad and engaging soundfield. Even though the mid-range isn't particularly extensive, imaging is fairly dynamic and clean for a film of this vintage and quality with appreciable acoustic details. Bass is probably most surprising, exhibiting excellent response and providing depth to the music. Although the ADR work can be pretty distracting at times, vocals are clear and precise, making this a great track. (Audio Rating: 3.5/5)

Blue Underground brings a double-feature of two "so-bad-it's-good" cult Italian films from Bruno Mattei with co-direction by Claudio Fragasso. The first is a nonsensical zombie flick that's funnier than scary, and the second is a slightly more entertaining post-apocalyptic feature about mutated, flesh-eating rodents. Both films arrive on Blu-ray with surprisingly good audio and video presentation but a sad collection of supplements. Nonetheless, the overall package is sure to please cult enthusiasts everywhere and will want to add this to their collection of baddies.

Sale Price 29.49
Buy Now
3rd Party 22.36
In Stock.
See what people are saying about this story or others
See Comments in Forum
Previous Next
Pre-Orders
Tomorrow's latest releases