Directed by acclaimed filmmaker Wong Kar Wai, The Grandmaster is an epic action feature inspired by the life and times of the legendary Kung FU master, Ip Man who mentored Bruce Lee. The story spans the tumultuous Republican era that followed the fall of China's last dynasty, a time of chaos, division and war that was also the golden age of Chinese martial arts. Filmed in a range of stunning locations that include the snow-swept landscapes of Northeast China and the subtropical South, The Grandmaster features virtuoso performances by some of the greatest stars of contemporary Asian cinema.

No matter how you cut it, Wong Kar-wai's 'The Grandmaster' is obsessed with the concept of direction; specifically, as the film's protagonist, the legendary Ip Man (Tony Leung), mentions: "Horizontal and vertical." He is, of course referring to kung fu, boiling its many schools, philosophies, and traditions down to two things: A winner and a loser, a combatant on the ground and a combatant left standing. For a film so outwardly and visually focused on the teachings of kung fu, and the legacies Ip Man has left behind – which is overtly referenced in this cut of the film – that would seem to be par for the course, or 'The Grandmaster' summing up its own essence. But Wong Kar-wai's obsession with direction, which he imbues the long-gestating picture with isn't nearly as concerned with kung fu as it would have you believe. Instead, that fixation, that dour fascination with direction is really more about the inexorable pull of time, the universal bearing, which brings everyone and everything to an indisputable end.

At its best, the film illustrates how inflexibly some people cling to history and tradition, despite shifting attitudes in the culture: the way people think, view customs, rituals, and most of all, wind up discarding convention. For all its impeccable fisticuffs and opulent visuals, 'The Grandmaster' also exhibits a very distinct, nuanced, and doleful concept of time that embraces what little of it humankind is granted – the equivalent of a raindrop in a downpour – and how, whether the average individual is perceptive of it or not, every moment is spent pushing against the tide, striving to make the most of such a brief instance, and to perhaps comprehend what it all means.

But 'The Grandmaster' is also concerned with the idea of how events ranging from the high-stakes drama of war, to the slightest, barely perceptible motion or connection can radically alter the trajectory of an individual's life. Focusing on the latter half of Ip Man's life, the film picks up just as the Northern and Southern schools of martial arts have begun their search for the next grandmaster. All the while, rumblings of war with Japan continue to reverberate through the background of every scene, playing up the central conceit of change and how jurisdiction over one's self is often a misleading notion. Wong Kar-wai expresses this notion most clearly by bifurcating the narrative to include not just Tony Leung's Ip Man, but also Ziyi Zhang's Gong Er – the daughter of the reigning grandmaster. 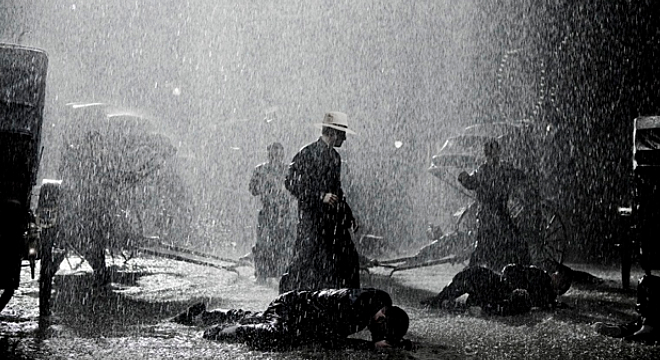 While Ip Man seems to be the logical – and her father's – choice for grandmaster, after demonstrating the greatest achievement one can attain in kung fu is knowing when not to use it, Gong Er takes issue with the appointment and challenges Ip Man's simple, but effective Wing Chun style with the "64 hands" technique passed down by her family. The sparring of Ip Man and Gong Er is not simply an amazing battle between two masters; it is a courtship, the beginning of a romance that will go unrequited, as life invariably gets in the way of such things. There is a connection the two share that will echo across the years the film has yet to cover. Like everything else in the two characters' lives, this affection and admiration is put on hold after war breaks out – which also leaves Ip Man without his family, his home, and the inheritance he once lived on. Meanwhile, Gong Er loses her family's legacy to her father's former protégé, prompting her to reclaim what is rightfully hers in one of the film's most extravagant and gorgeously filmed fight sequences. Although the characters' lives are nearly destroyed, the film alters its focus, so as to avoid lingering on all that he's lost by focusing instead on the inevitability of it all. This is, after all, a film fixated on time.

These themes and ideas are certainly familiar to anyone who has taken in the work of Wong Kar-wai before, but because of the subject matter of 'The Grandmaster,' its long journey from conception to delivery, and of course, the film's wildly contentious edit (read: the perceived dumbing down) for American audiences, the tenor and weight of such themes have been rightly questioned. In fact, the distinction – perceived and otherwise – between the two versions of the film is so touchy, it becomes somewhat difficult to talk about one without including the other. In that regard, the American version of the film comes in at 108 minutes, which is significantly cut down from the original Chinese edit of 130 minutes. While the runtime has been altered significantly, the biggest change is that the trimming effectively transforms a winding, multi-layered story about two distinct individuals into a straightforward tale about Ip Man. And saying it wants to be a tournament film, like, say 'Man of Tai Chi' does, best sums up that tale.

The edit essentially whittles down the grand nature of 'The Grandmaster,' pushing it toward a more conventional biopic about a single man, rather than a plaintive homage to a world pushed aside by the encroachment of modernity. Historical footage is replaced with title cards attempting explain everything that is going on, while identifiers pop up every time a new a character is introduced, telling the viewer who the individual is, and attempting to signify his or her importance. The effect of the edits is sweeping; the film not only attempts to constrict the legacy of Ip Man down to 108 minutes, but it also pushes aside the majority of Gong Er's arc, making her a supporting character, rather than the co-lead she was intended to be.

Still, unnecessary changes aside, it is clear from the opening sequence, in which Ip Man battles a gang of men in the middle of a downpour, that few films, martial arts or otherwise, are as beautiful as what Wong Kar-wai has managed to deliver here. The film is simply exquisite to look at; it combines the supple elegance of 'In the Mood for Love,' with the exhilarating force of 'The Matrix' – thanks largely to the fight choreography from Yuen Woo Ping. And while this version is not the best available, it is a testament to the work of the director and his actors that the American edit of 'The Grandmaster' still emerges as an entertaining and visually decadent film. 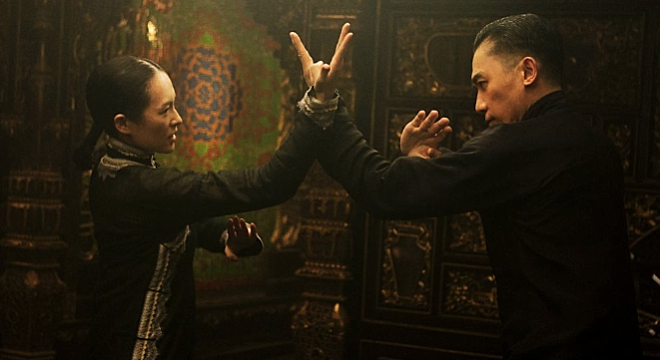 'The Grandmaster' comes from Anchor Bay as a single 50GB Blu-ray disc in the standard keepcase. There are a handful of previews that play automatically, but they can be skipped to move straight to the top menu. Unsurprisingly, the disc defaults to the inferior English dub, so changing over to the original Mandarin DTS-HD 5.1 mix is required.

'The Grandmaster' has been given a highly stylized yet detailed image that is certainly reminiscent of the director's previous efforts. The picture is stylized in a way that uses close-ups and out-of-focus imagery to the benefit of the film's overall aesthetic. While the close-ups generally contain an enormous amount of fine detail, wider shots will feature such detail to a lesser degree. Still, texture is abundant in all the right places; characters' clothing – like a jacket that is important to Ip Man's narrative and certain ornate costumes – are richly detailed look quite good. Backgrounds and environments are also very detailed, giving certain scenes a nice sense of depth.

Contrast levels are very high throughout, making many of the nighttime action sequences crisp and distinct. During these darker moments, there is no evidence of crush or banding going on, and the shadow delineation is quite good. Color is also abundant, especially when Ip Man is sparring with Gong Er. There are times when the color seems to be running too warm, and the environment appears to be closer to the orange spectrum than the golden spectrum, but it is a brief instance.

The image works to deliver Wong Kar-wai's vision for the film. While the film is stunning to look at, there are a few kinks in the image to be worked out. Overall, though, it is quite good. 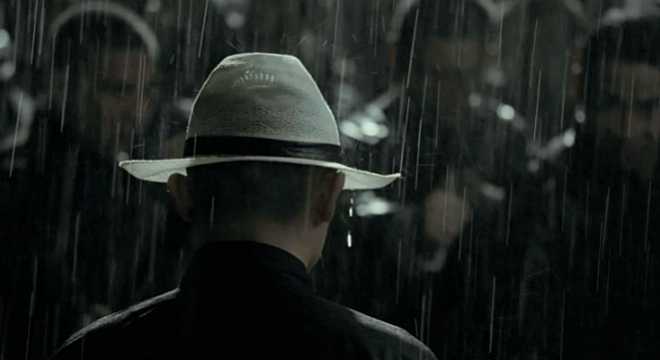 The Mandarin DTS-HD Master Audio 5.1 mix handles both aspects of the film with great aplomb. Dialogue is distinct and easy to hear, affording a clearer understanding of the emotional weight carried by their words than the English dub. But the mix also delivers the action sequences with the kind of exuberance and force that would be expected of a martial arts film. The sound field demonstrates an impressive dynamic range; atmospheric effects abound during the early portion of the film. Raindrops are as pervasive as the sound of fists on bodies, generating an immersive experience that propels the viewer into the film straight away.

Most of the heavy action is relegated to the front right and left channel, while the rear channels generate atmospheric elements. The mix displays impressive balance between the sound effects, score, and dialogue, but it handles imaging and directionality with even greater skill. LFE produces deep, rich bass that accentuates the action without overwhelming it.

There are a few moments when the sound seems to be weaker than it should, but overall, this is a great sounding mix. 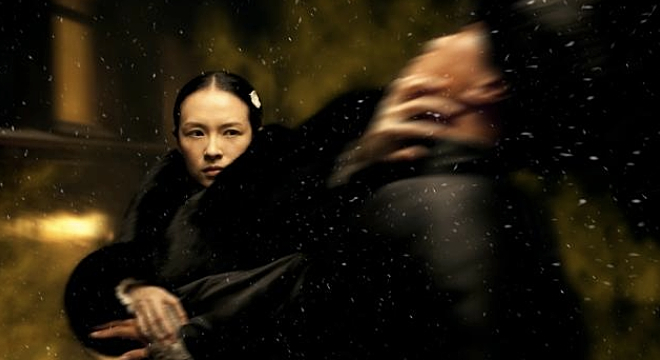 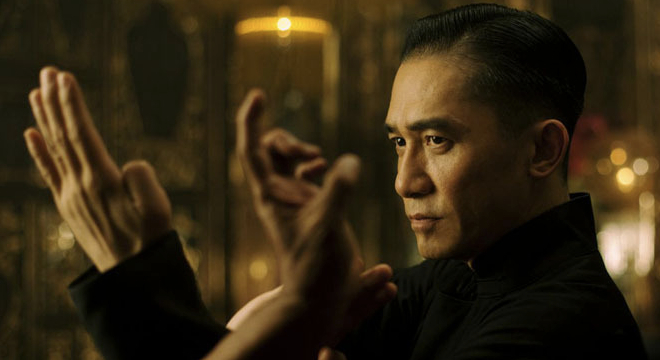 In the world of the Internet, in which most things – especially films – can only exist as either The Best Thing Ever or The Worst Thing Ever, having mixed feelings about a film that was erroneously edited, and yet still manages to emerge from such a vivisection with surprising energy will likely be met with a familiar kind of derision. It is true that the original Chinese edit of 'The Grandmaster' is the superior version. However, for those who have not seen the original – and even for those who have – the American edit is still worth seeing; it will likely impress with its sumptuous visuals and entertain with its storyline that still has resonant themes about time and the relentlessness of life's ever-dwindling light. And for those who are already familiar with the Chinese edit, this version will never replace the original, but it may improve your appreciation and affection for it, by serving as a unique blueprint that serves to expose the true strengths of the original version. With the original edit available as a region-free disc, it would be impossible to recommend this to own, but regardless, it's still worth a look.

Sale Price 11.46
List Price 14.99
Buy Now
3rd Party 6.02
In Stock.
See what people are saying about this story or others
See Comments in Forum
Previous Next
Pre-Orders
Tomorrow's latest releases