Wes Anderson returns to the wonderful land of whimsical comedy filmmaking with his tribute to journalism, The French Dispatch. Starring the traditional stable of Anderson Players - Billy Murray, Owen Wilson, Adrien Brody, Tilda Swinton, and many familiar and new faces - the film is a hilarious satire of feature-article journalism. Perhaps not his strongest film, but nonetheless another joyful journey. 20th Century Studios/Disney delivers an excellent 1080p Blu-ray release with a beautiful image transfer and entertainingly immersive audio. If you can’t wait for the eventual Criterion release, this is a great piece to add to the collection. Recommended.

[Excerpt From Our Theatrical Review]
“Wes Anderson has come a long way since Bottle Rocket. From there, the Texas filmmaker has created a Wes Anderson universe of movies, full of weird, yet iconic characters that people still talk about and dress up as. Anderson's style went from New England to Paris, France where there is still the love of a bygone romantic era in his movies. The French Dispatch is no different, where this time, he takes the normal narrative of a live-action or animated movie and combines all those elements into a few different stories told by these characters that work for a newspaper out of rural Kansas. And it all works perfectly in a flawless Wes Anderson form… 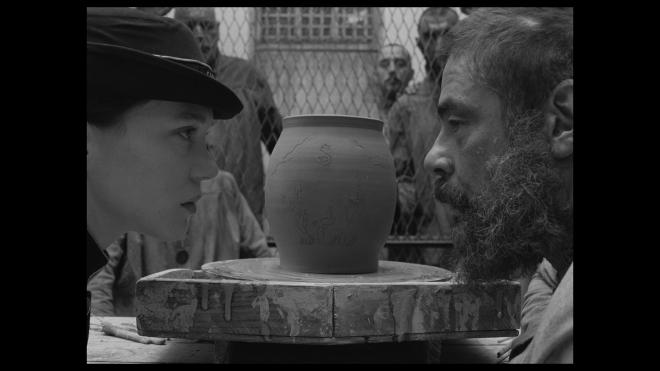 Anderson mixes black and white flashbacks with full-on color sequences that amaze the eyeballs with Anderson's iconic color palette. Additionally, Anderson adds in some animated sequences, motion comic scenes, and live-stage play sequences to tell these stories, making it all a cavalcade of art and telling a story. It's truly remarkable. While making and telling these unusual, yet energetic stories, Anderson never loses focus on his love for journalists and their writing, as he always makes sure that the head editor of the French Dispatch tells his journalists to write what they want and the way they want to tell it - something that is all too missing these days in many publications who just want a headline for clickbait. It's a poetic tale of what goes on behind the scenes to get the citizens of the world the news and to read interesting and poignant stories, no matter if it's about crime, art, food, or sports - and all with Wes Anderson's stamp on it.”

As a huge Wes Anderson fan - not just in girth but in enthusiasm - The French Dispatch was exactly what I needed to see when I needed it most. Holiday stress, bad news cycles, work woes - I just needed something absolutely absurd. The three vignettes (and little side pieces) that create The French Dispatch are joyfully hilarious with a richly dark sense of humor. Anderson always brings a whimsical sense of humor to his films but this was whimsy mixed with biting satire. I needed that. This film plays like a tribute to the random curio stories you would find in any given issue of The New Yorker but at the same time there’s a humorous bent to them that’s both earnest, loving, but also needling. 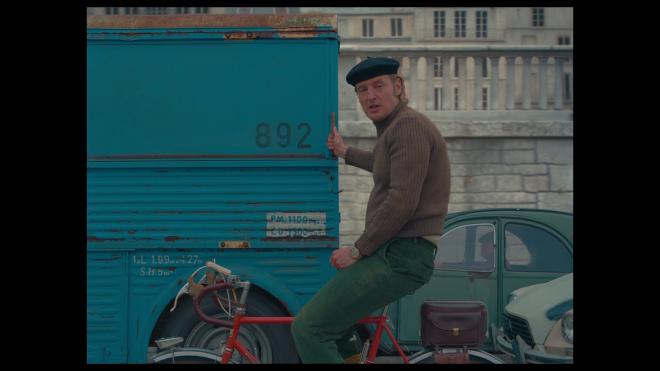 For my money, The French Dispatch probably doesn’t rank in Anderson’s “Top Five” films, but it’s still a strong contender if you’re somehow able to quantify his entire career. My main issue is the three-story structure - it’s equally not enough and too much. For how complex some of the stories are to get to the butt of the joke, there are too many little stories. At the same time, any one of these stories would have been enough on its own. This got me thinking - The French Dispatch would actually have been Wes Anderson’s best attempt at a limited television series. Each hour-long episode could have been its own self-contained story or main story with some small side pieces. The film as a whole runs about 110 minutes, but it jumps around with the only throughline being the editor played by Bill Murray and that everything takes place in the fictitious French city of Ennui. It’s tight and it moves and it’s never boring, but with the fragmented structure, the stories themselves don’t quite feel whole. That’s where I think a limited series event would have worked better and we could have gotten even more little stories out of the adventure in the process. And if successful a second season.

At the end of the day, The French Dispatch is another highly entertaining feature from a master craftsman filmmaker. Every piece of the film is so intricately pieced together that it’s easy to get lost just looking at the unique world Anderson has created. It can be a lot to take in and that’s why I feel a series structure would have worked better. You’d get more time to tell the tall tales but also more time to soak in the visual artistry - and fully appreciate the numerous visual gags this film offers. It’s still a great movie and if you’re a fan of Wes Anderson’s brand you should get a lot of enjoyment out of it.

Vital Disc Stats: The Blu-ray
The French Dispatch comes to home video by way of Disney/20th Century Studios in a single disc Blu-ray + Digital release. Pressed on a Region-Free BD-50 disc, the disc is housed in a standard sturdy case and loads to an animated main menu with basic navigation options. 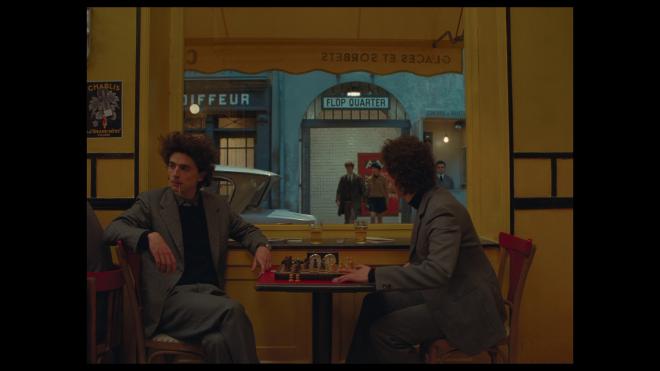 Wes Anderson certainly has a distinctive visual style. If he’s not content presenting his sets and locations as full-scale dioramas, he’s going to play around with aspect ratios, film stock, and Color/Black and White. The French Dispatch follows a similar line as The Grand Budapest Hotel - this film is presented in two different aspect ratios - 2.39:1 and 1.37:1. The listed aspect ratio is 1.85:1 but the image hasn’t been reframed to fit your screen.

The French Dispatch was shot on 35mm (with a brief animated interlude) and finished with a 4K Digital Intermediate - and it looks amazing. I keep hoping Anderson’s films will start making their way to 4K (on disc at least) and it looks like we’ll have to keep waiting. For now, this disc is fantastic. The image boasts clean details with an organic film grain structure. The black and white scenes are gorgeous with a terrific greyscale allowing for deep inky blacks with bright bold whites and subtle shadow gradience in between.

Color sequences give an amazing blast of primary pop - depending on any given scene in question. Sometimes it’s bathed in yellow, sometimes blue, others a fierce bright bold orange. Image depth is always appreciable, especially during Anderson’s now-iconic panning diorama sets. Even with alternating aspect ratios the image never feels choppy. There’s an organic movement between visual presentations so it never feels out of place or distracting.

Maybe when this film moves to The Criterion Collection (c’mon you know it’s going to happen!) we’ll get this in 4K Ultra HD Blu-ray. I looked at the streaming 4K version out there on various platforms and while it’s pretty good - my standard complaint with black levels and compression artifacts mires what should be a gorgeous-looking presentation. 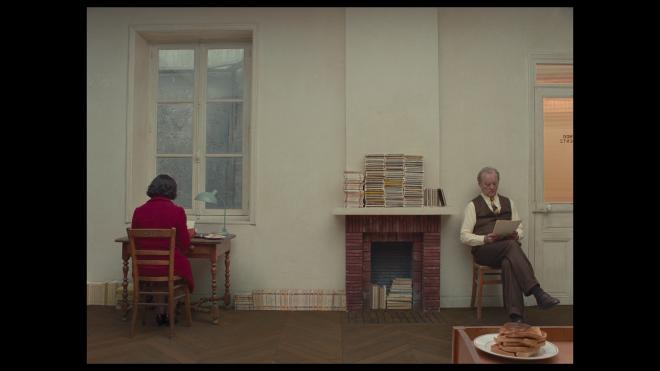 The French Dispatch arrives with a delightfully engaging DTS-HD MA 5.1 audio track. Dialog is clean and clear throughout and Alexander Desplat’s jaunty score fills each sequence nicely. Surround channels are almost always active albeit in subtle ways. From the echoey prison to the tight cluttered newsroom to the active streets of this fictitious French city of Ennui, each location has a distinct sound, and activity around the surround channels reflects these changes. I actually thought it was a gag within a gag that the prison full of violent murderers was the calmest and sanguine setting in the entire film - that’s where Anderson’s use of sound and placement of sound effects works so well. It’s not an action-packed whizzbang feature but throughout the film, the soundscape is full and engaging with a nice immersive quality during any given sequence. 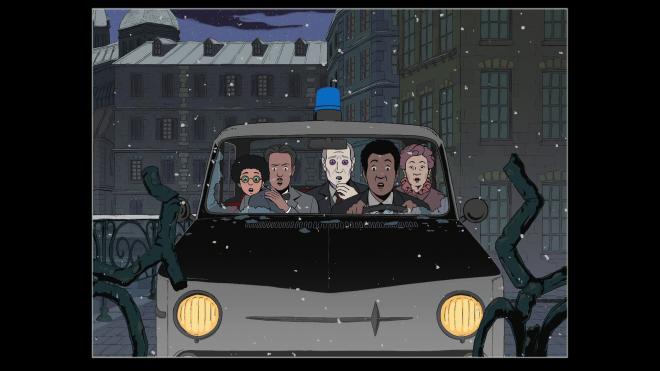 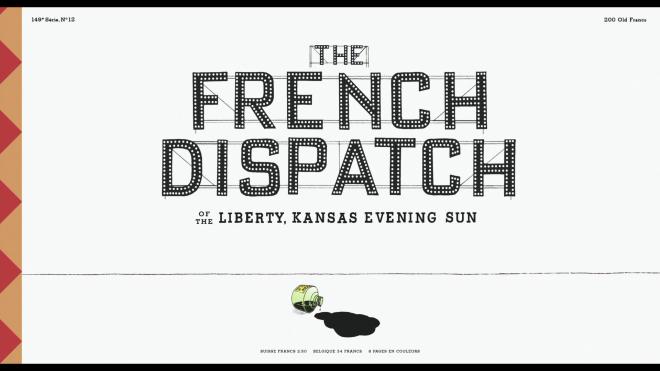 The French Dispatch is unabashedly a Wes Anderson film. Filled with the kinds of characters and stories you’d expect from the filmmaker at this point in his career. If you’re a fan of his work, you’ll feel right at home with this little anthology film. If you’re not on the Anderson bandwagon, this isn’t likely going to be the movie to make you a fan. I enjoyed it. It plays to my brand of humor. But at the same time, it didn’t fully win me over as Anderson’s last efforts The Grand Budapest Hotel, Isle of Dogs, and Moonrise Kingdom. But thankfully his next feature Asteroid City is well into production and should be gracing our cinema screens soon - pandemic permitting of course.

Until The Criterion Collection announces their edition (again, you know it’s coming), The French Dispatch can be enjoyed at home on Blu-ray. This barebones release sports an excellent A/V presentation but is void of bonus features. Owning this film at this point in time is merely owning a placeholder for a (hopefully) better release down the line. Recommended