Lead by the U.S. military, a team of scientists secretly travel into Red China to find the truth behind rumors of a downed U.F.O. While enroute to the saucer's hidden location, the Americans meet a group of Russian scientists who are also searching for the spacecraft. The two teams race against time to find the alien craft and its promise of a fantastic jump in technology, while trying to avoid the Red Chinese troops in the area. Television veteran Frank Telford directed this action-packed science fiction thriller with top-notch cinematography by the great Hal Mohr (The Wild One, Captain Blood). The stellar cast includes Dan Duryea, Bob Hastings, Bernard Fox and James Hong.

Of the many avenues available to the genre of science fiction, one of the most common is the idea that the story can use fantastical elements to underline common fears or concerns of the present. They may involve extensive world building, wherein the extraordinary accurately reflects apprehensions or anxieties the modern day. Other times, though, as in the case of 1968's 'The Bamboo Saucer,' science fiction is blended with reality in order to draw a more distinct and overt connection to a palpable concern like, say, the Cold War and the ever more present threat of nuclear annihilation, as tensions continued to rise between the U.S. and the Soviet Union.

Dealing with that concern in an oddly saccharine fashion, 'The Bamboo Saucer' mixes fears of the Cold War, the escalating concern of the spread of communism through China – exclusively referred to here as "Red China" – and the omnipresent threat of the unknown. Of course, since the film was released just about a year before the Apollo 11 moon landing, there's a considerable amount of tension regarding the space race present here as well. While it seems like that's a lot for a 'G' rated sci-fi film operating on an incredibly limited budget to handle, the screenplay manages to get by with a lot of generalizations about nearly everything, and by turning the discovery of the eponymous saucer into the unifying event the world needs to get out of its nuclear arms funk.

The film begins with pilot Fred Norwood (John Ericson) having a close encounter with a UFO while flying an experimental supersonic jet. Naturally, his superiors want nothing to do with this unidentified flying object hooey, and Norwood winds up unemployed and, soon, living out of a trailer, spending his days desperately trying to track down the bizarre spacecraft he encountered. After a second encounter with the UFO leaves one of Norwood's pals dead, he is contacted by Hank Peters (Dan Duryea), a U.S. Secret Service officer, who describes a strange craft that crash landed in the mountains near a remote Chinese village, and is given the opportunity to join a secret mission to track the spacecraft down. Joined by two technicians Dave Ephram (Bernard Fox of TV's 'Bewitched') and Bob Hastings (Jack Garson), the small group parachute into Red China, only to come across a group of Soviet Soldiers led by a man named Dubovsky (Rico Cattani) and Anna Karachev (Lois Nettleton), a lovely scientist who, as it happens, can speak English. After a brief squabble, and the realization that a large group of Chinese soldiers are on their way, the two groups band together to unlock the mystery of the strange, abandoned craft that's been locked away inside a dilapidated church. There, they learn that, despite their paranoia and differing ideologies, they're not so different from one another. 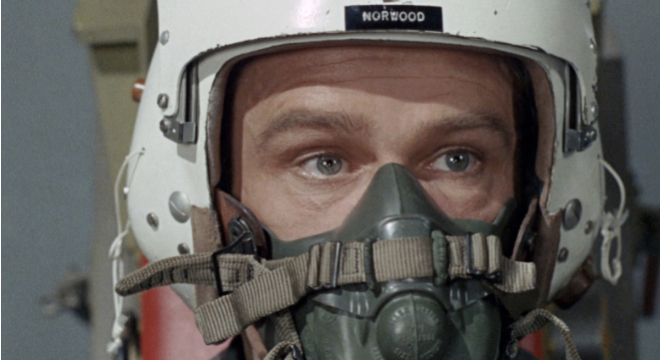 Of course it's not uncommon for a science fiction film to have a message buried somewhere within its story, but typically that message comes in the form of subtext, or, at the very least something slightly more subtle than this. For all its early efforts to create intrigue and tension regarding the mysterious craft seemingly haunting Norwood, and later the two opposing forces with the exact same mission, the narrative of the 'The Bamboo Saucer' grinds to a halt once the saucer is placed front and center. The tenuous peace and eventual alliance between the Americans and Russians simmers beneath the surface of a discovery that will undoubtedly change the course of human history. As seems to always be the case, old grudges and antiquated forms of thinking get in the way, however, as first a Russian attempts to sneak away in the saucer for the glory of the Motherland, only to face deadly consequences. Following that apparent betrayal, Dubovsky and Peters, the two elder statesmen, and lifelong military men, struggle with the notion of aligning themselves with their sworn enemy.

And although the film's third act erupts in a violent shootout between the surviving members of both groups and the Chinese soldiers, 'The Bamboo Saucer' uses that conflict not as a means by which it suggests that conflict is the answer, but rather the exact opposite. In the surprisingly lengthy final segment, three survivors find themselves in an even more perilous situation, before coming to the conclusion that the saucer and all its technological wonders should be shared by the world as a whole – rather than belonging to just one superpower.

In the end, 'The Bamboo Saucer' is filled with pleasant but sometimes stiff performances, likely hindered by the screenplay's need to express itself so overtly. That straightforwardness dilutes the end product somewhat, as the moralizing nature of the film gradually overwhelms everything, leaving little room for interpretation or analysis. Still, this is a sometimes-fun picture, in the sense of its historical perspective, and it is certainly unique for its unconventional view on the Cold War and its boldfaced insistence on the push for peace and unity. 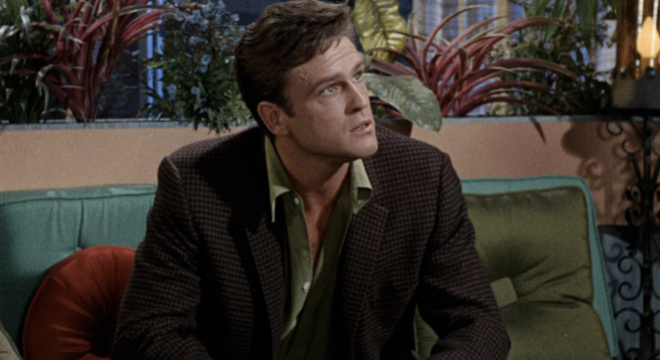 'The Bamboo Saucer' comes from Olive Films as a single 25GB disc in the standard keepcase. There are no previews or special features of any kind on the disc.

Barring some issues with damaged film early on, the 1080p AVC/MPEG-4 encoded transfer looks very sharp and clean throughout much of the film. It looks as though the image has been cleaned up some, as the presence of grain lessens gradually, giving way to a smooth, mostly detailed image that is surprisingly bright and, for much of the time, quite clean. Fine detail is typically seen in close-up, though there are some nice wide shots that show off the film's depth of field and offer a nice, textured environment for the characters. Facial features are modestly detailed throughout, again, mostly in close-up, while textures seem to work in much the same way. Color is quite nice, though, as skin tones look lifelike and consistent throughout and the earthy tone of the environment is rendered convincingly. Contrast is generally good. Black levels are deep and consistent, while whites can tend to run a little hot, making some scenes a tad washed out.

Addiitonally, there are moments where the image still contains some elements of noise, dust, or the occasional scratch or two, but overall, the improvements here mostly outweigh the small issues that persist.

The DTS-Master Audio 1.0 track does a fine job of making the dialogue easy to hear, but it lacks the kind of depth a lossless track like this can often have. While characters sound clean and precise, most of the sound effects and the score tend to sound a little shallow and often somewhat weak in comparison. Some of this is due to the sound dropping farther than necessary to make way for the actors' dialogue, which results in action sequences that lack energy and sound effects and music that can sound somewhat tinny at times. There is little in the way of atmospheric effects, which is likely due to the film's age. Still, many of the sequences and scenes can be eerily quiet at times, while others are filled with the whirring noise of the saucer. The climactic battle between the two groups of soldiers and the Chinese shows how the monaural track can handle several elements and deliver a somewhat complex sounding product. Unfortunately, the mix just doesn't do too much for the rest of the film.

'The Bamboo Saucer' does not contain any special features.

Like its competing groups, 'The Bamboo Saucer' has a lot of ideas; it just doesn't know how to convincingly portray them or to deliver them in a way that also creates a truly compelling sci-fi feature. The film still has some charm to it, especially for fans of older science fiction and even war films. With better than average picture and okay sound, this one is worth a look if your curious.

Sale Price 23.58
List Price 29.95
Buy Now
3rd Party 19.58
In Stock.
See what people are saying about this story or others
See Comments in Forum
Previous Next
Pre-Orders
Tomorrow's latest releases