Sir Walter Scott's classic novel receives a rousing screen treatment from director Richard Thorpe, but even such lofty actors as Robert Taylor, Elizabeth Taylor, and Joan Fontaine can't eclipse the star power of Warner Archive's brand-new HD master struck from a 4K scan of the original Technicolor camera negatives. The transfer's the thing here, and its unequivocal brilliance lifts all the pageantry, spectacle, and high-octane action of this beloved medieval epic to lofty heights. Ivanhoe may be 70 years old, but this glorious Blu-ray presentation makes it look like it was filmed yesterday. Highly Recommended.

After the blockbuster success of the Roman epic Quo Vadis, MGM sought another period property for the strapping Robert Taylor and settled on Ivanhoe, an adaptation of Sir Walter Scott's 1819 historical novel about the Norman-Saxon conflict. Taylor traded his toga, breastplate, and sandals for tunics, boots, and a metal coif for this classic tale of jousting, sword fights, damsels in distress, and political skulduggery in 12th century England. Though director Richard Thorpe's film lacks the grandeur and scope of Quo Vadis, Ivanhoe captivated audiences (it was MGM's highest grossing film of 1952), earned a Best Picture Oscar nomination, and remains a stirring spectacle, thanks to several spirited action sequences that temper the often turgid drama.

Shot entirely on location in England, Ivanhoe opens with the eponymous Saxon knight searching the Austrian countryside for Richard the Lionhearted, England's "warrior king" who "vanished without a trace" on his way home from the Third Crusade. Wilfred of Ivanhoe (Taylor) learns Leopold of Austria abducted Richard (Norman Wooland) and demands a king's ransom of 150,000 marks of silver for his release, a sum Richard's weaselly brother Prince John (Guy Rolfe), who's conspiring with the Normans to seize power, refuses to pay. 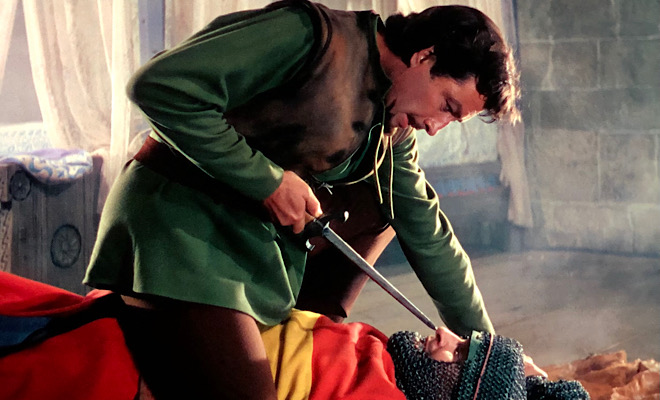 The bitter conflict between the Saxons and Normans has divided England and put the country on the brink of civil war. Prince John hopes his Norman knights, led by Sir Brian de Bois-Guilbert (George Sanders) and Sir Hugh de Bracy (Robert Douglas), will vanquish the Saxons at a jousting match, thus proving their superior strength and fitness to rule, but Ivanhoe, one of England's most formidable fighters, vows to rebuff the rival faction. He promises his long-time love, Saxon princess Lady Rowena (Joan Fontaine), he'll raise the funds needed for Richard's ransom and restore the Lionhearted to his rightful place on the throne.

Isaac of York (Felix Aylmer), the patriarch of the Jews, and his daughter Rebecca (Elizabeth Taylor), who pines for Ivanhoe, aid the cause in the hope Richard will end their people's persecution, but as the Normans' takeover bid intensifies, Ivanhoe must also enlist the assistance of Robin of Locksley (Harold Warrender) and the Clerk of Copmanhurst (Sebastian Cabot) - alias Robin Hood and Friar Tuck - and their band of merry thieves to help the Saxons beat back the threat. 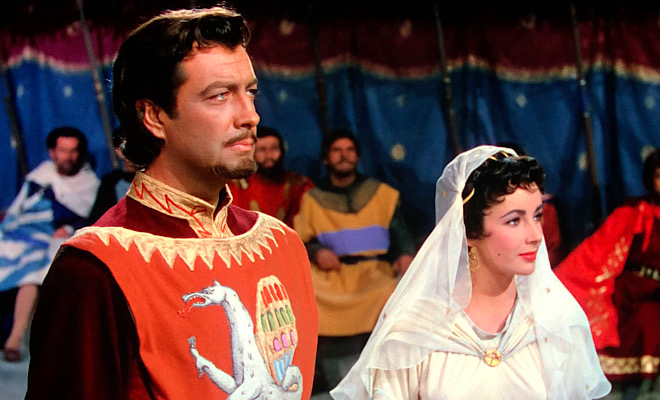 With its noble knights, imprisoned damsels, chivalrous deeds, and spirited sword fights, Ivanhoe often resembles a bygone fairy tale (and occasionally a stuffy costume drama), but several of its themes still strike a chord today. The divided country ripped apart by ideological differences, authority figures spreading lies to sway public sentiment, an attempted coup, a witch-hunt with political motives, and the xenophobia that leads to discrimination and persecution are all familiar components of our current culture, and they lend Ivanhoe an ironic relevance it otherwise might not have in this day and age.

The witch-hunt aspect surely must have resonated in 1952 when McCarthyism was at its peak, and it directly effected the Ivanhoe production. One of the film's writers, Marguerite Roberts, a former Communist Party member, was blacklisted after she refused to testify before the House UnAmerican Activities Committee in 1951. MGM then removed her Ivanhoe screenwriting credit, which has since been restored, yet presumably because this Blu-ray transfer was struck from the film's original Technicolor camera negatives, her name does not appear on the print used for this release. As a result, Noel Langley, best known for adapting The Wizard of Oz and the Alastair Sim version of A Christmas Carol, receives sole screenplay credit. 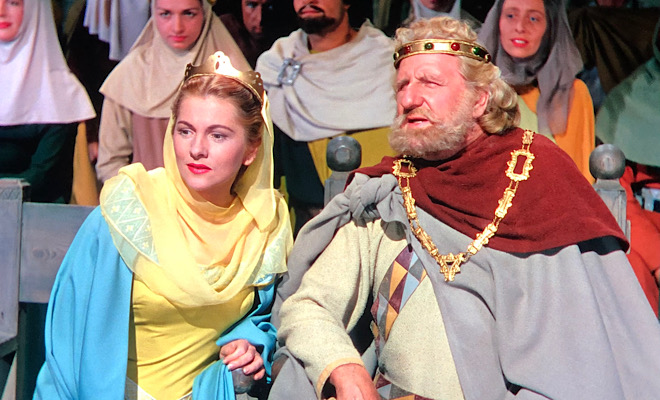 The pompous script, however, is not the movie's strong suit. The actors recite the literate yet stilted dialogue with conviction, but often seem more concerned with getting all the words and cadences correct than injecting emotion into their line-readings. Though at age 40 the square-jawed Robert Taylor is a bit old for his part, he nevertheless makes a dashing Ivanhoe, while poor, dewy-eyed Joan Fontaine is trapped in a drab, dimensionless role that only requires her to express longing, worry, and concern and look adoringly at Taylor.

Ivanhoe was not at all a happy experience for the other Taylor, the future Dame Elizabeth, who suffered from gastrointestinal issues during filming (she looks painfully thin and drawn on camera) and mental duress stemming from both the paparazzi coverage of her disastrous marriage to Nicky Hilton and MGM's disapproval over her new romance with director Stanley Donen. As a result, she files an uncharacteristically catatonic performance that reportedly was so uninspired on set, producer Pandro Berman and director Thorpe demanded she loop all of her dialogue in post-production. Still looking and sounding subdued after the re-recording (one can only imagine how lifeless her original line deliveries must have been), Taylor fails to infuse the fiery Rebecca with any passion, thus making Ivanhoe's preference for the far plainer Rowena almost believable. 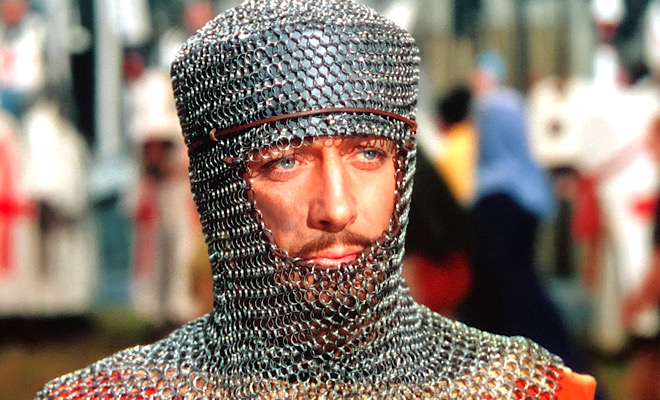 Thorpe's lack of innovation hampers the dramatic scenes, which look and feel stagy and stiff, but the veteran director fashions a trio of exciting, eye-filling action sequences that make Ivanhoe an energetic and entertaining swashbuckler. The jousting match that features a couple of gasp-inducing hits, the lengthy siege of the Norman castle that includes a spectacular fire, and the violent climactic showdown between Ivanhoe and De Bois-Guilbert all brim with vigor, style, and matinee thrills. Miklós Rózsa's majestic score and Freddie Young's lush Technicolor cinematography both garnered well-deserved Oscar nominations and keep the eyes and ears engaged when the story sputters.

While many historical epics collapse under their own elephantine weight, Ivanhoe somehow endures. It's not particularly memorable, but it's fun while it lasts...and thankfully doesn't overstay its welcome. The captivating visuals, muscular action, glittering cast, impressive pageantry, and whimsical narrative immerse us in a bygone era and join forces to create a rousing piece of escapist entertainment. 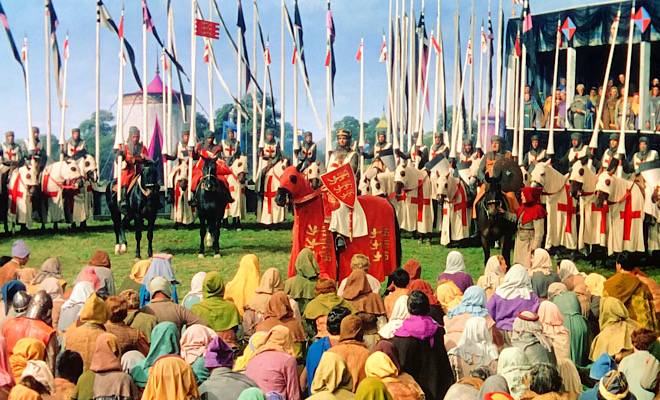 Vital Disc Stats: The Blu-ray
Ivanhoe arrives on Blu-ray packaged in a standard case. Video codec is 1080p/AVC MPEG-4 and audio is DTS-HD Master Audio 2.0 mono. Once the disc is inserted into the player, the static menu with music immediately pops up; no previews or promos precede it.

A new HD master struck from a 4K scan of the original Technicolor camera negatives yields an absolutely jaw-dropping 1080p/AVC MPEG-4 transfer that's a true Technicolor love-in. Perfectly pitched to present the lush, vivid hues in the finest possible light, this impeccable rendering also benefits from exceptional clarity and contrast and a lovely grain structure that preserves the feel of film. A few instances of softness crop up now and then, but the image remains remarkably consistent throughout, with inky blacks, bright, stable whites, superior shadow delineation, astonishing detail levels, and natural flesh tones all combining to produce a vivid, vibrant picture that keeps the eye glued to the screen from beginning to end.

Ivanhoe was filmed just a year before the dawn of CinemaScope, and while the widescreen process would have intensified the movie's epic flavor, the intimacy of the 1.37:1 aspect ratio allows us to drink in more details, feel closer to the action, and savor the splendor of the glamorous close-ups. (Early CinemaScope films eschewed close-ups in favor of spectacle shots that filled the rectangular screen.) Credit esteemed cinematographer Freddie Young with the spectacular visuals. Young would later win three Oscars for his work on David Lean's Lawrence of Arabia, Doctor Zhivago, and Ryan's Daughter, but his superlative Ivanhoe photography earned him his first Academy Award nomination. And what a well-deserved nod it was! Whether shooting exteriors in the lush English countryside, stark interiors on cavernous medieval sets, or wonderfully realistic day-for-night sequences, Young crafts beautifully composed shots in both natural and artificial light that immerse us in the narrative. This terrific transfer faithfully honors his work and increases our admiration for one of cinema's finest craftsmen. 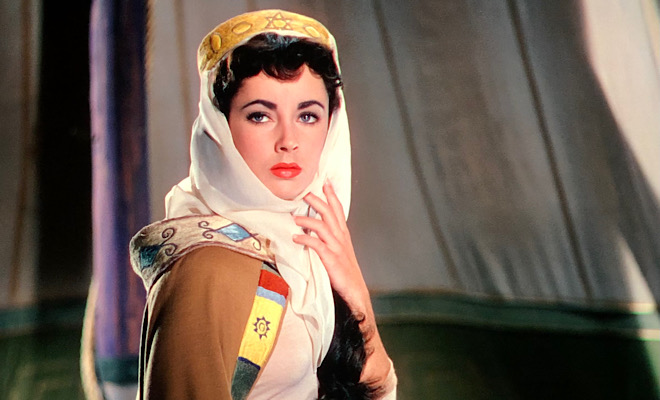 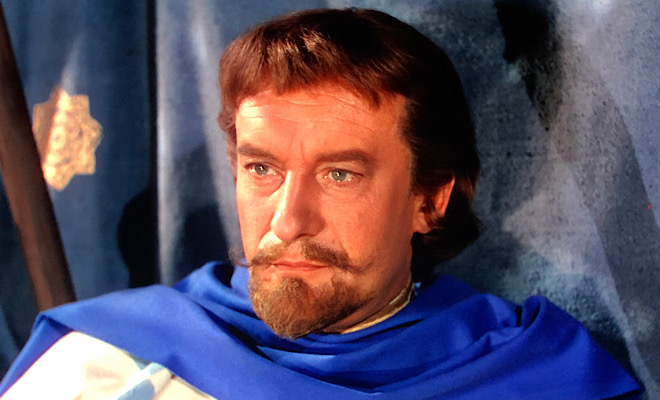 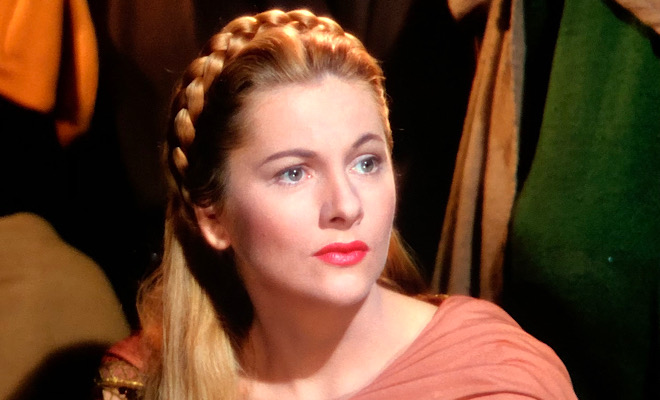 The tiniest details make huge impressions. The array of costume fabrics, from knotty wool and satiny silk to delicate lace and embroidery, exhibit marvelous texture, as do the myriad metal rings that make up the distinctive chainmail coifs worn by Robert Taylor, Sanders, and others. The sandy grit and rough-hewn contours in columns and stone walls, the creases in a worn leather bag, and jewelry adornments all grab attention. Superb depth draws us into the film, seamlessly integrated matte paintings enhance scope, and sharp background elements in long shots heighten the immediacy and authenticity of the production. Breathtaking close-ups highlight the ravishing beauty of Elizabeth Taylor, the rugged, weathered complexion of Robert Taylor, Fontaine's delicate skin, and the careworn lines on Sanders' face. The hairs in the wild, unkempt beards of Currie, Felix Aylmer, and Sebastian Cabot are remarkably distinct, and pores and follicles are visible, too. 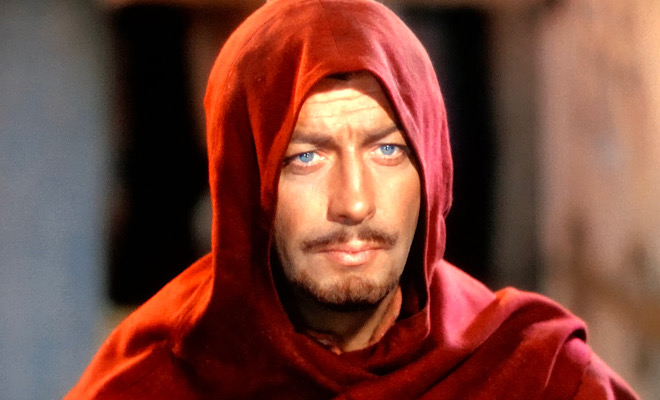 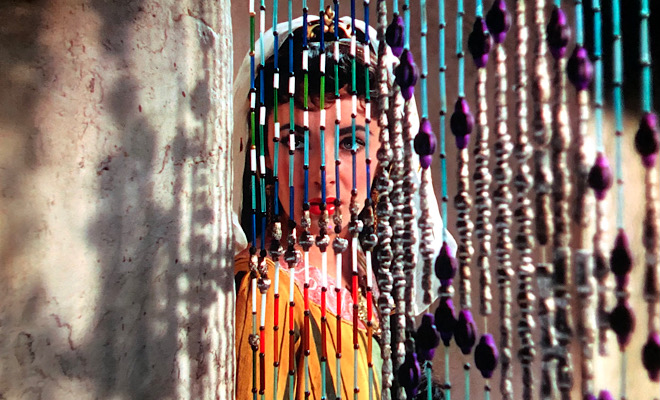 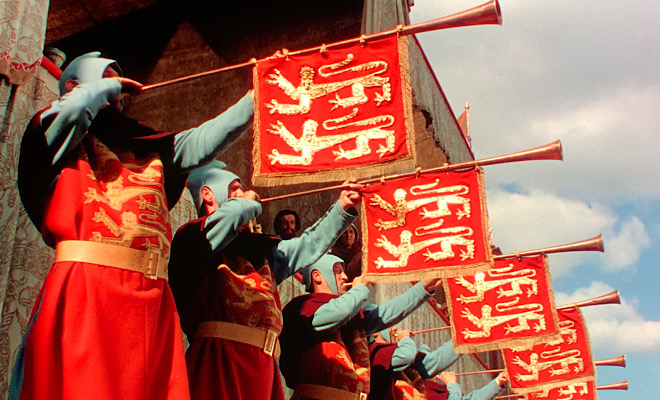 But oh, those colors! Bold red flags, cloaks, and tunics, royal blue scarves, the verdant green landscape, deep orange flames, pale yellows and periwinkles...all the hues make a statement and delight the eye. Technicolor has a tendency to overwhelm the image, but this top-notch transfer keeps it in check, bringing out its best but not allowing it to distract from the plot or diminish our emotional response. It's a tricky tightrope to walk, but Warner Archive does it well, and Ivanhoe is the latest example and success story. Never has this epic film flaunted such visual swagger, and anyone who reveres Ivanhoe - and those seeing it for the first time - will be dazzled by the splendor of this restoration.

Galloping horses, clanking swords, crackling flames, and a rousing, robust, Oscar-nominated score by the legendary Miklós Rózsa make Ivanhoe come alive, and the DTS-HD Master Audio 2.0 mono track handles all the elements with aplomb. Excellent fidelity and tonal depth help the majestic music fill the room, and a wide dynamic scale handles all of the soaring highs and weighty lows of the brass, strings, and percussion without any distortion. The aforementioned sonic accents are crisp and all the dialogue is well prioritized and easy to comprehend. With all the eye-popping visuals stoking the senses, it's easy to neglect the audio, but this balanced, crystal-clear track elevates the Ivanhoe experience exponentially.

Ivanhoe remains a robust spectacle seven decades after its premiere, and Warner Archive's eye-popping, downright scrumptious new HD master struck from a 4K scan of the original Technicolor camera negatives brings this classic medieval tale into the 21st century. Though director Richard Thorpe's adaptation of Sir Walter Scott's novel feels a bit stiff and stodgy during its dialogue scenes, the first-rate action sequences and all the colorful pageantry energize this historical epic and make it a rousing film experience. Highly Recommended.